How to grow the population of Armenia: Repatriation or Immigration? (Goal 9)

The recent Artsakh war had one silver lining: it served a cause, an impetus for many Diasporan to think of repatriation to Armenia. For those who already have repatriated, life in Armenia is not easy; it is full of challenges but at the same time very exciting.

The office of the High Commissioner for Diaspora Affairs came to replace the Ministry of Diaspora. It is responsible for developing and implementing strategies for improving Armenia-Diaspora relations, supporting and encouraging repatriation, and assuring an active integration process. Repatriation is a multilevel process made up of various processes. What is the trigger that forces people to repatriate? How do you treat people from different backgrounds coming to Armenia? Since independence, there hasn’t been an institutional approach to repatriation. With the Syrian war and the massive immigration of Syrian Armenians into Armenia, this became an urgent matter that needs multilevel solutions.

There are three areas that the Office is concentrated on. Number one is the policy that defines who repatriates are. The second one is professional repatriation that aims at bringing back high-skilled professionals to Armenia. The third area is the repatriation and integration center.
This center serves as a one-stop-shop for all inquiries related to repatriation. The center simplifies the processes which would otherwise be perceived as incompatible, primarily because of the language barrier.

There is a vulnerable Armenian population in Lebanon who wants to leave Lebanon especially after the Beirut blasts and come to Armenia. A month before the Artsakh war around 2000 people were repatriated. And the office had prepared an assistance package to be given to these people, but the war slowed down all processes. The help to Lebanese Armenians repatriating to Armenia is not institutionalized yet, but the office is willing and happy to help in any way possible to facilitate the processes.

The key to explosive economic growth is the speed of learning and gaining knowledge. So, we need to create a learning society in Armenia. Armenia is a small country with a small population, so it’s not that hard to do that. All we need to do is enhance state-private-Diaspora triangle mutual relationships. Provided the growing economic conditions and some incentives for different age group diaspora representatives, there will be high-rate repatriation.

For young entrepreneurs who have difficulty finding their market share in mature economies like the US and Canada, Armenia is the best business environment. Despite all the political instability, Armenia’s economy is growing 10% a year. And with some security provided, this will serve as a great incentive for repatriation.

A lot of industries are untouched in Armenia, and there are a lot of opportunities and funds for starting your own business here. On the other hand, why many young Armenians decide to stay and live in Armenia after a short visit, is the lifestyle.

On the social aspect, there is much improvement in the country. It is a perfect balance of having enough diversity to be able to keep the national and traditional, the community love and tightness. It is small enough to be able to see your beloved people often and bump into someone you know in the street, and big enough so that you meet someone new every time.

Armenia’s Diaspora that chooses to come and spend their holidays in Armenia, come and bring their culture/western traditions with them. And this external influence in Armenia is reflected in all its areas, work and business as well.

Emigration out of Armenia happens for two major reasons: economic and security. For the Armenian working-class people that form the majority of the population, it’s been hard since 1991. These are known as the dark years when there was no gas or electricity. And then, the problem was not becoming economically more stable, it was more how to feed the family. And naturally enough many families found their way out through emigration. The security aspect is a big factor. The Artsakh war showed not only the gaps and discrepancies of the Armenia state and institutional system, but it also took many lives of young people. And of course, families that have young men close to the age of military service would prefer to leave the country, since no family, no matter how patriotic they are, wants to lose a child.

And at this point, the role of the Diaspora is essential in the sense of bringing the foreign capital and the business into Armenia, investing in Armenia. This will revive the economy, provide employment for many, and create a chain reaction.

The office of the High Commissioner for Diaspora Affairs serves as a bridge between the Diaspora and the Armenian Government. It serves as the voice of repatriates and those thinking to repatriate in Armenia, by representing their ideas in the Armenian government. 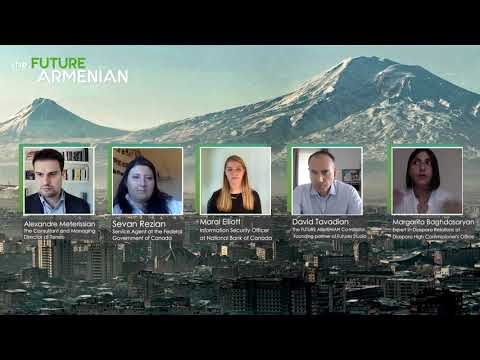