The second panel discussion on the energy sector aims to evaluate the current state of the energy sector in Armenia and define its mid-term and long-term development directions and possibilities. The relationship between energy freedom and economic growth in the country is important to be discussed.

The World Energy Agency made an announcement regarding countries decreasing CO2 emissions to zero points. Here, the significant role and importance of renewable energy are also mentioned. In Armenia, we have HPPs and TPPs and heritage from the Soviet era, the NPP, which takes up half of Armenia’s energy consumption. Therefore, Armenia has all the potential and expertise to be among the leaders of the transition process the world is going through. Armenia needs to make use of the Diasporan expertise, as well as the help from various international companies.

All in all, the new dynamics of the 21st century and the changes that come with it should be considered and put to better use: using better energy sources, decreasing energy waste and increasing savings. These elements will define the future stability of the energy economy of Armenia.

ARMARAS Think Tank was founded by various field representatives of the French-Armenian community. The specialty of this Think Tank is analyzing the essential elements and fields of Armenia-Diaspora relations. Everything is interdependent and interlinked. In the energy sector, the picture is the same; it’s global. We are convinced that Armenia can be a leader, an innovator and a creator in the energy sector since it has all the potential of leading the path to both renewable energy and making the best use of the non-renewable types of energy resources.

The world is facing substantial climate disasters, and we need all the brains we have to prevent those disasters. We can think of a Green Nation concept. The concept lies in creating independent communities (using creating greenhouses in each region of Armenia), which will have its energy, water, and infrastructure, assuring the region’s security and the independence of the rest of the regions. In other words, to build smart cities. We need to strive for energy independence.

The mission of the National Future Energy Leaders (NFEL) Armenia is to shape a proactive professional community of young Armenian energy professionals of Armenia (+Artsakh) and on the international level, to contribute to the country’s energy sector transparency, security, self-sufficiency, affordability and sustainability.

The initiative is founded by young energy professionals and in cooperation with the World Energy Council. To join, please follow the link. 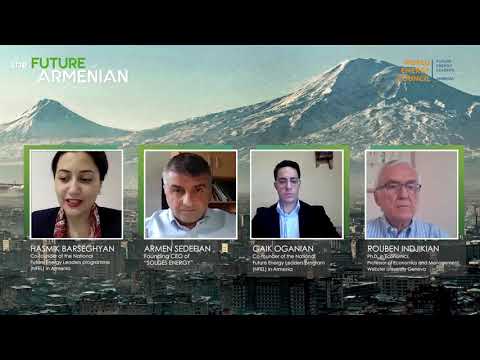