The panel discussion will be devoted to the first goal – Vision Setting – to collectively define and own Armenia’s future. Setting a collective vision is essential, but no less important is having a pragmatic vision with determination to follow and reach. . The world is constantly changing, and sometimes unexpectedly, it is vital to move in parallel, and adjust the vision to the changing world. To achieve the goals, apart from setting the vision, we need to be clear and pragmatic about its process and application.

When it comes to advise, everyone is ready to give advice. But who is listening to it is the question. We can take the world history examples as guides for us and try to evaluate the chances and possibilities for Armenia to succeed and understand who would benefit, who would be against a prosperous Armenia.

A pragmatic approach and vision can be building quality, high-class scalable schools in Armenia, not only like Dilijan, and allowing broader masses to study there (also the orphans of the soldiers fallen in the recent war). This will create national elites who will stand for Armenia and assure its national growth in the years to come. It can be a drive for the Diaspora to send their children to study here. It would also create opportunities for the students to acquire the level of education that will enable them to continue their studies at Harvard, Yale, etc.

Vision has two sides: prose and poetry. Poetry is the beautiful words to describe what we want and where we want to go, and the prose  – the complex practicalities that lie behind that act. Every successful entity – individual, company, business, country, tells a story about itself. And what is Armenia’s story? All that is associated with Armenia is rather negative – Genocide, war, poverty. And what we’ve learned the hard way during 106 years and more so last year is that the world does not care about Genocide or war. We need to create Armenia’s story. What is particular about the Genocide is not the mere fact of genocide but the resurrection. Other nations went through it and did not survive, but we did. And we need to tell our story in that context. The significant achievements by numerous representatives of our nation in Armenia during the Soviet and post-Soviet era and the broad Armenian Diaspora should be built into our story and told around the world. The disadvantages of the region Armenia is located in can be played in favor of Armenians – telling the story of what we are as opposed to what they are not.

Armenia needs to create reasons good enough for the Diaspora to come back to Armenia. School is a strong one, both for parents and their children to think of coming to Armenia.

What is implied under schools is having centers of excellence. These centers will gather the most renowned Armenian academics worldwide and attract people to come to Armenia.

We need to build a state. Building a state is expensive; we speak of billions here. Here the few most wealthy Armenians who made their fortune worldwide should think of having a branch of what they do in Armenia.

Armenia and Israel are compared often, especially on the background of nations that survived genocide. But we are standing on two very different starting points, facing two very different scale enemies and growth paths. So, maybe it is not relevant for Armenia to be compared with Israel and its development path.

There are no parallels in history, and we should not take one specific case and try to apply it to Armenia. On the other hand, we can always look into other cases and understand the algorithm. Just like experienced sports commentators do, “watch many sports games, every one of which is unique,” but the algorithm of all of them is the same: which are the steps that should be taken and which are those that should be avoided.

Institutionalism is on a very low level in Armenia, and it’s been functioning the wrong way for the last many years. Although it is not easy to build institutions as such, for that matter, it’s time for many of us to come back to Armenia, roll up our sleeves and get to work.

Why not send enough students abroad to study? There have been numerous programs sending students to study abroad. Here we need more than that. The real question is how to bring these students back to Armenia. The solution has two sides. There should be a materialistic reason and a patriotic reason. That’s why I’m speaking of boarding schools and centers of excellence.

Why do perfect recommendations and measures fail? Maybe failure is in the interest of someone. As such, politicians worldwide are in politics for their personal interest, and it is due to the people and the social demand that politicians develop broader interests. The short answer to why politicians do not follow good recommendations is that they know they can get away with it. There are two ways to scare the political elites: revolution and losing a foreign war.

Simplicity is our friend, and complexity is our enemy: let’s focus on the three competencies – competent economy, competent state, competent military.
The experience of the nation’s talent and the bright youth is the solution. 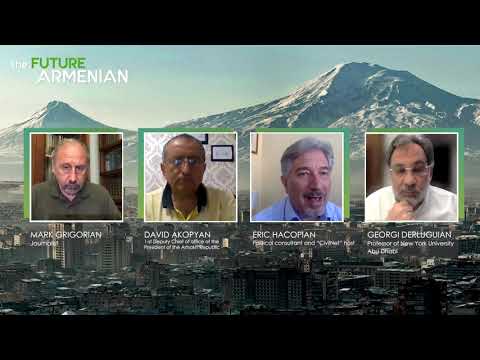